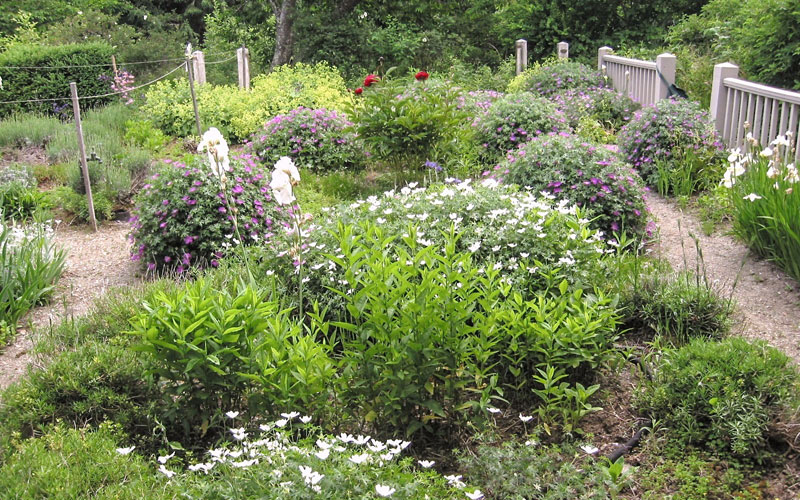 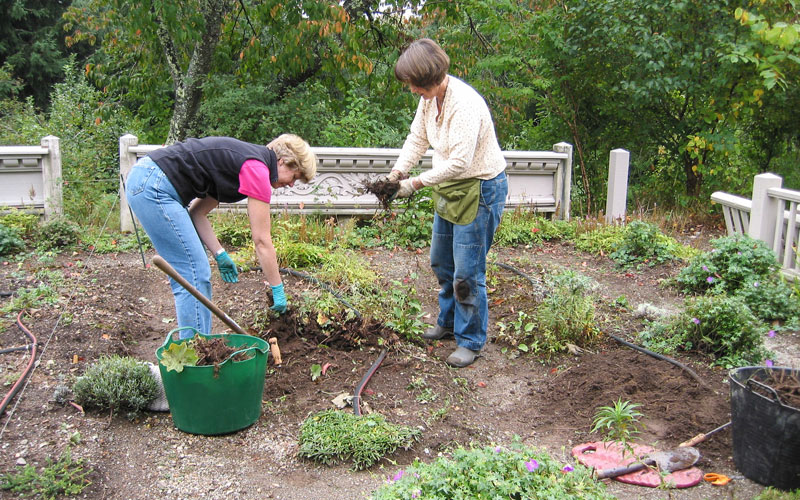 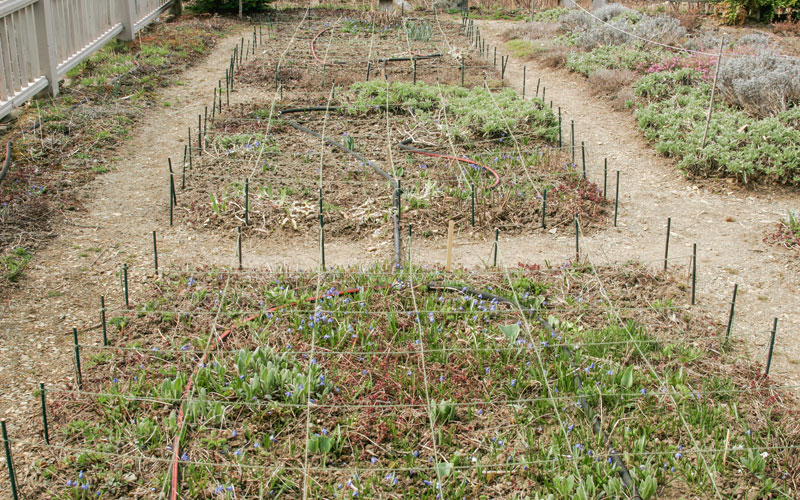 String Grids set for bulb identification prior to relocation, spring 2008 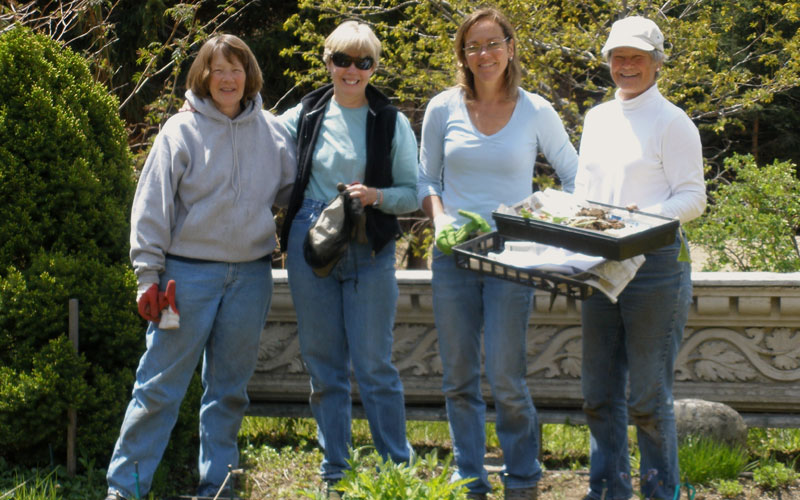 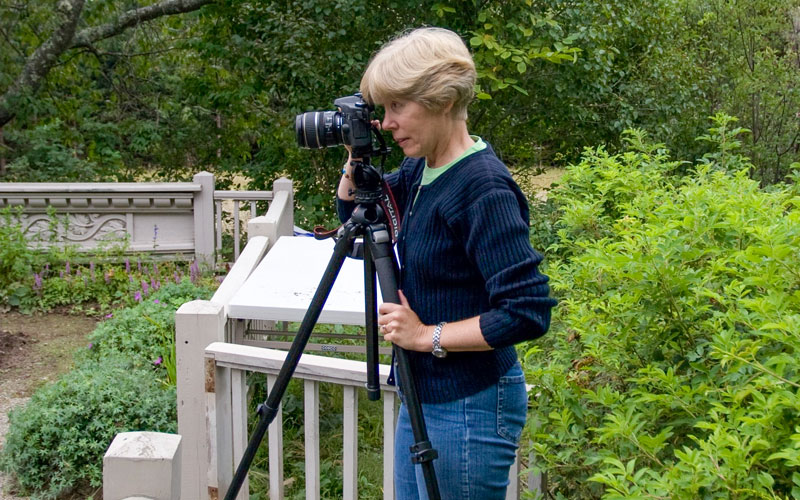 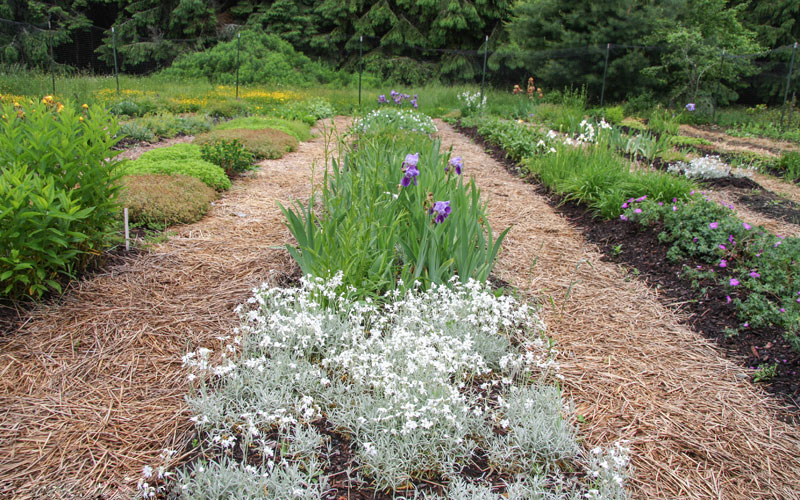 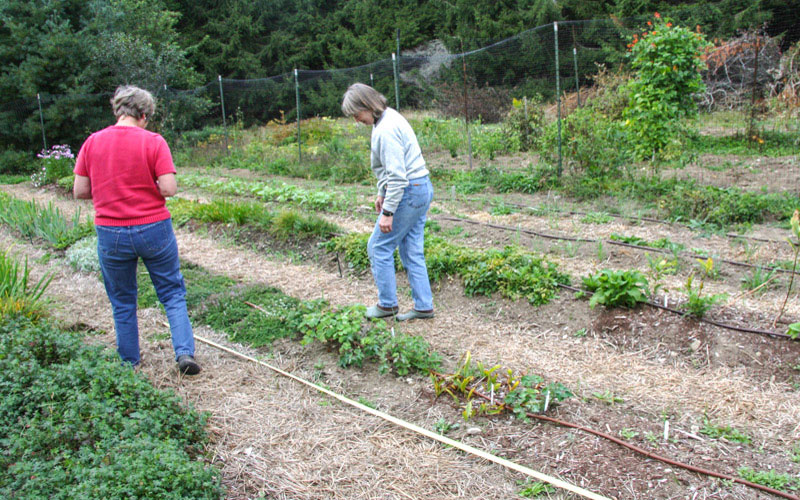 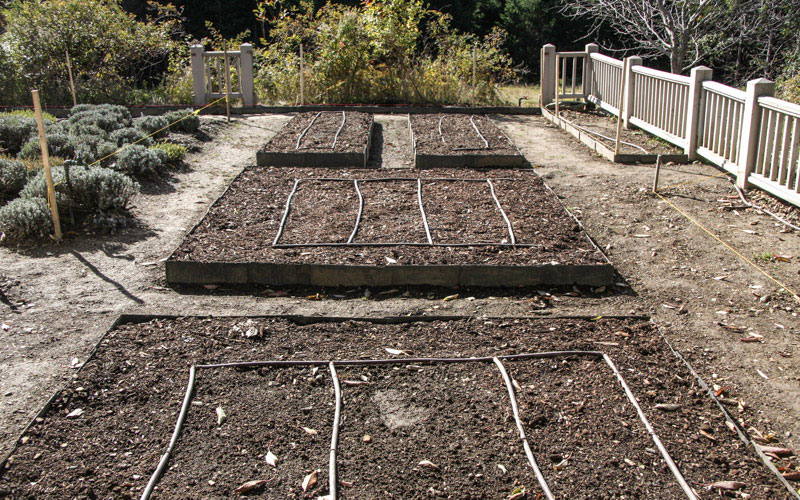 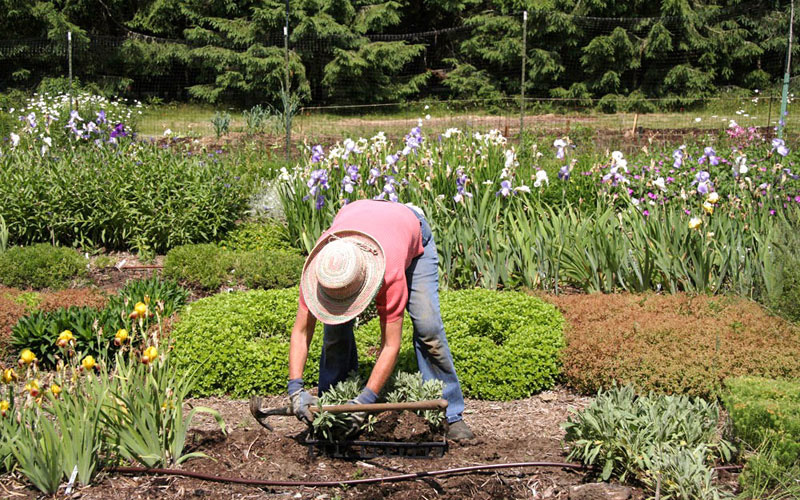 Relocating historic plants back to the Terrace Garden, spring 2010 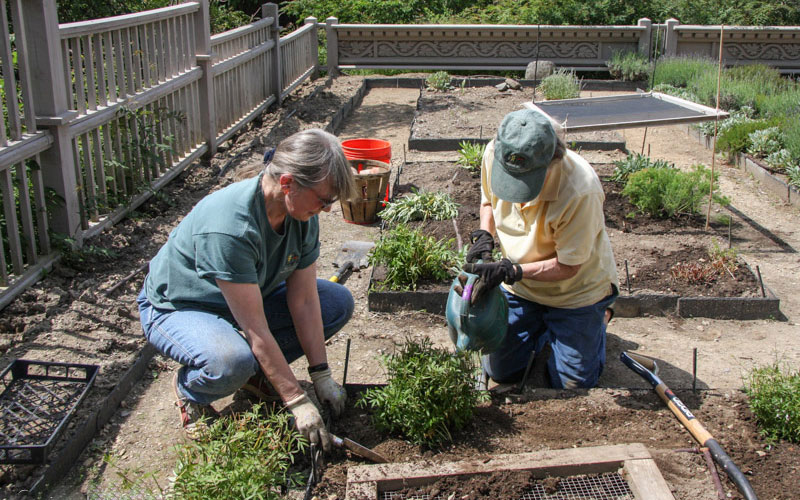 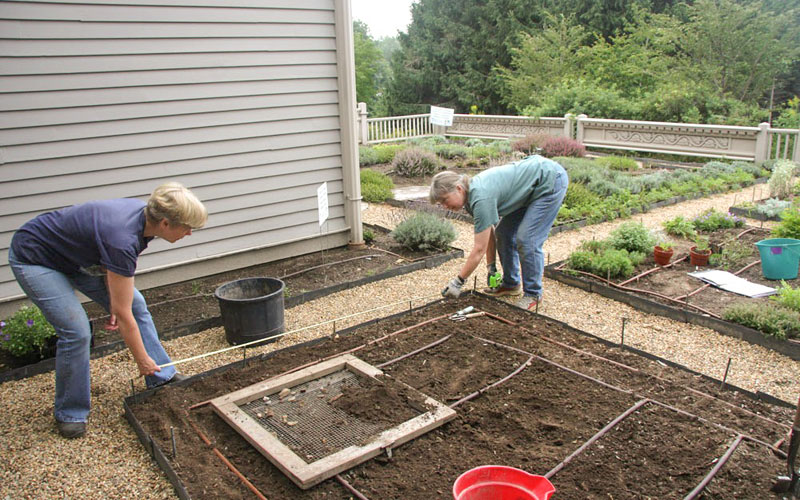 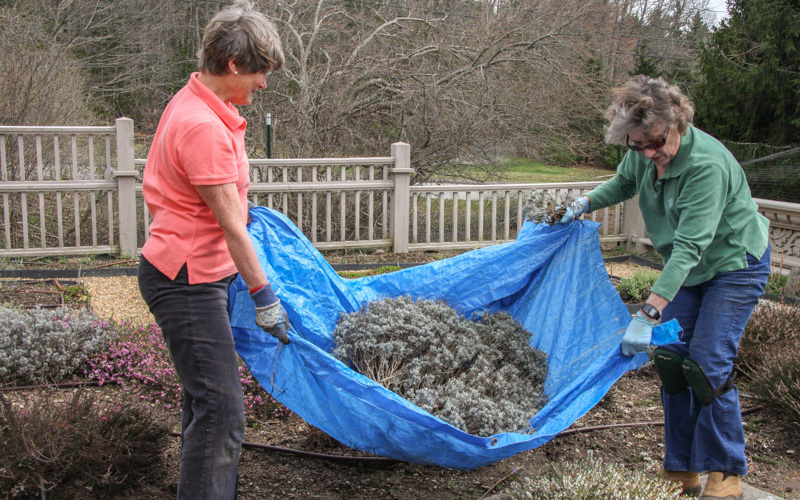 Relocation of old lavender to make way for replacement heath and heather, spring 2011 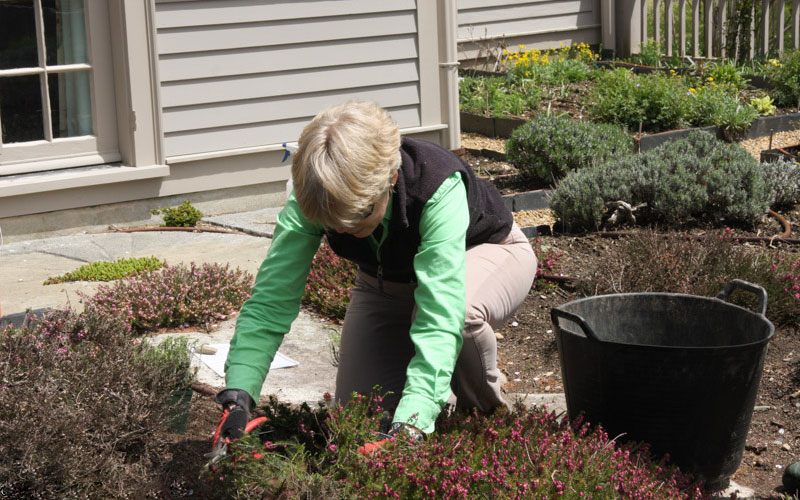 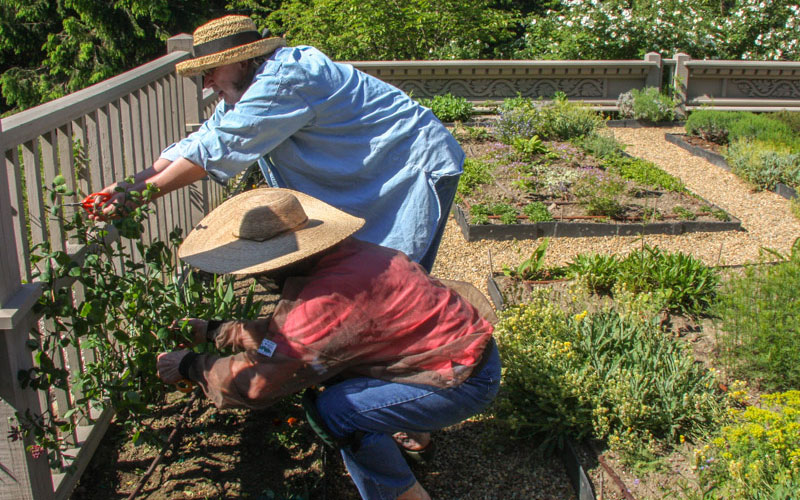 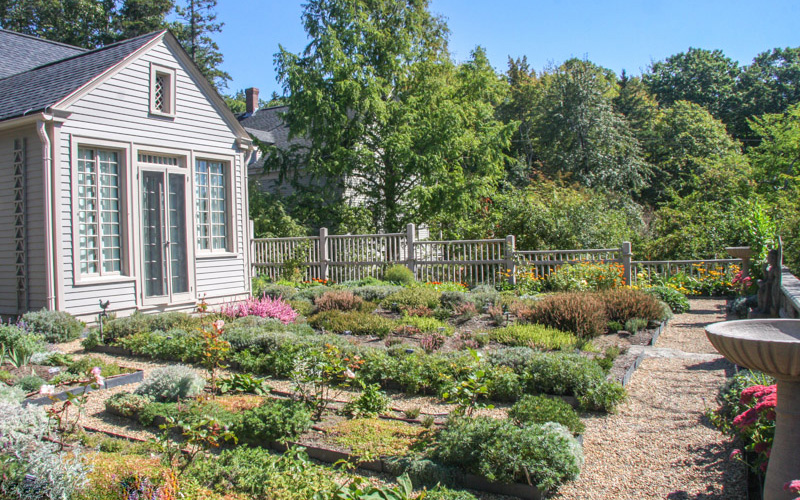 In 2006, members of the University of Maine Master Gardener Volunteers proposed the Terrace Garden at Garland Farm as a site for a Master Gardener project to assist in the maintenance and preservation of the historic garden at Garland Farm. Easily approved by the Master Gardener Advisory Committee, a team of two Master Gardener Volunteers began working in the garden during the late spring of 2007. After a few short weeks of working at Garland Farm, it became apparent to Patrick Chassé, then President of the Beatrix Farrand Society, that the volunteer organization was serious about restoring the garden and that their role could expand beyond maintenance issues. Since funding was not yet available to hire professional contractors to restore the Terrace Garden, Chassé saw the potential in having the volunteer team begin the process.

Armed with a copy of Mary Alice Roche’s detailed planting plan of the Terrace Garden published in Flower Grower: The Home Garden Magazine in 1962, as well as a copy of Newcomb’s Wildflower Guide, the volunteers began searching for the historic plant material that Farrand had specified. Non-historic perennials, added after Farrand’s death, as well as native plants that had seeded in the garden, needed identification. Weekly field notes, accompanied by photographs documented their progress. By the end of 2007, historic plants were located, borders were redefined, paths were cleared, weeds were removed, lavenders were pruned and cuttings taken for propagation. In the process, the stepping stones through the heather beds were once again revealed.

Satisfied with the quality of work provided by the Master Gardener Volunteers, the Beatrix Farrand Society asked the team to return in 2008 to start the first phase of the rehabilitation process for the Terrace Garden. This consisted of identifying the layer of small bulbs in the garden, collecting soil samples, relocating the plants, and providing documentation of the process with weekly notes and photographs. Accepting this challenge, the volunteers came up with a plan to implement these tasks. To document the bulb layer in the garden, grids were constructed in the beds using garden twine and sections of bamboo stakes. A bulb key was prepared and bulbs within each quadrant were identified, tallied and spread sheets were prepared. Drawings were prepared for each bed showing the location of plants on Beatrix Farrand’s original plan, the Cultural Landscape Report treatment plan and material found at the time of relocation. A 50’ x 70’ holding garden was created on the site of the original vegetable garden to house the perennials and bulbs removed from the Terrace Garden. Rows designated as historic and non-historic were constructed by independent contractors to facilitate sorting the perennials. Bulbs were also sorted and soil samples were collected. Each Terrace Garden bed was dug up, one at a time, and the plants were relocated to the holding garden in a left-to-right sequence.

After the Terrace Garden beds were dug up, the exact dimensions could be reestablished. The beds were then trenched, layered with newspaper, and mulched to prevent soil erosion. With the exception of the heather beds, all plant material from the interior rectangular Terrace Garden beds was relocated to the holding garden by September 2008.

The Master Gardener Volunteers returned in 2009 to complete the relocation of plants from the perimeter beds and to help maintain the plants in the holding garden for the remainder of the season. A generous grant form the Institute of Museum and Library Services helped fund the restoration of the Terrace Garden beds and replace missing historic plant material. The reconstruction of the slate-edged raised beds, installation of an irrigation system, and regrading of the paths was undertaken by Coplon Associates of Bar Harbor. By November 2009, the 14 raised beds were reconstructed and ready for replanting the following year.

The volunteers accepted the final challenge of returning the historic plants to their proper places in 2010, using the Terrace Garden Rehabilitation plan and key provided in the Cultural Landscape Report by Pressley Associates, Landscape Architects, of Cambridge, Massachusetts.

Replanting 95 different types of plants in various quantities and configuration in each bed was an intimidating process. Numbers were assigned to each botanical plant name listed on the plan. To ensure that the right plant was returned to the correct site and to avoid having to read small print while working in the garden, larger drawings of each individual bed were prepared. Marker stakes were placed at the edges of each bed to correspond to the quadrant lines drawn on the diagrams in order to simplify the process of configuring the groups of plants. All historic plant material was transferred from the holding garden and replanted by midsummer. Existing lavenders were repositioned as needed to edge the heather beds. Some missing plants were ordered and donors came forward with additional replacement plants from their own collections. By the end of 2010, one third of the Terrace Garden had been replanted. The remainder of the plant material was researched, located and ordered through Islandscaping Garden Center, then planted in 2011. Only a few of the original plant species could not be located and in those instances, substitute species within the same genus were located as replacements.

Adding the finishing touches to the Terrace Garden restoration could not have been accomplished without the use of the collection of old black and white photographs entrusted to Diane Cousins by Amy Garland. Enlarging digital scans of some of these images provided adequate detail to provide clues to the missing garden elements: wood trellises, two birdbaths, a statue of bodhisattva (called Kuan Yin by Farrand), and a lead cistern. While one larger trellis was located in the Garland Farm barn, two were reproduced by a local craftsman using the old images to create the template. The missing statue, which had been purchased from Amy Garland by Peggy Rockefeller in 1964, was graciously donated to the Beatrix Farrand Society by David Rockefeller in July 2011.

Birdbaths were handcrafted to resemble those in the photographs by Lunaform, Inc and placed in the garden in September, 2011. A beautiful slab of weathered Hall Quarry granite was located in the spring of 2012 at Dennis K. Masonry. Sketches of a bench for the bodhisattva were drawn by Sam Coplon of Coplon Associates. Stones were then cut from the slab to create a replica of the original bench.The lead cistern had been purchased from Amy Garland by Charles K. Savage in 1964 and relocated to Thuya Garden. In exchange for a bureau that once belonged to Joseph Curtis at Thuya Lodge, the Mount Desert Land and Garden Preserve presented the historic lead cistern at Thuya Garden to the Beatrix Farrand Society that same year.