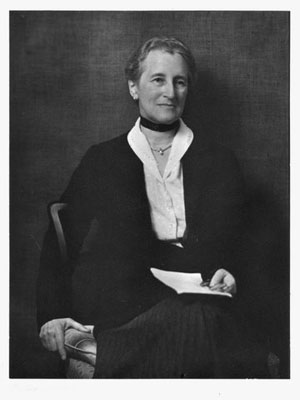 Beatrix Cadwalader Jones was born in New York on June 19, 1872, and her forebears came of Cornish, Dutch, English, and Welsh stock. She became conscious of plants from her early childhood, as her grandmother took her into her rose garden at Newport, Rhode Island, and taught the child how to cut off dead flowers; and the four or five year old little girl trotted after her grandmother and learned many of the names of the lovely old roses of that day. Often in later years her friends heard her speak of Baroness Rothschild, Marie Van Houtte, and Bon Silène with retrospective enjoyment.

When she was eight years old her parents came to Bar Harbor, and she well remembered the building of Reef Point in 1883, the designing of the road curves and the cutting of vistas and first sketchy plantations. As she grew up into girlhood she naturally became more and more interested in plants, since she came of five generations of garden lovers.

A fortunate meeting with Mrs. Charles Sprague Sargent, the gifted artist who made the drawings for her husband’s collection of American woods in the American Museum of Natural History, changed the course of the young woman’s life. Mrs. Sargent invited her to Holm Lea in Brookline where she met Professor Sargent, the first director of the Arnold Arboretum. Professor Sargent became interested in Beatrix Jones’s love for plants and suggested that she study landscape gardening. He offered to throw the facilities of the Arboretum open to her, and for months she became the grateful guest of Mrs. Sargent and the hard working pupil of Professor Sargent at the Arboretum. One day he astounded his pupil by telling her he had a professional job for her. When she protested she was not ready, he smilingly answered that she must learn while working for clients. Accordingly she set out for her first professional work to do some tree thinning and remodel a little planting on a garden on a slope.

Other work followed and as years passed she tried to heed Professor Sargent’s advice to make the plan fit the ground and not twist the ground to fit the plan, and furthermore to study the tastes of the owner. He told her to look at great paintings, to observe and analyze natural beauty, to travel widely in Europe and see all the gardens she could, and learn from all the great arts as all art is akin. Years of preparation were spent in accumulating such information as seemed likely to be of use, since there were no schools of landscape art in those bygone years. Italy, France, Germany, Holland, England and Scotland were visited and gardens studied. When she returned home, more work came to her and another chance meeting, with Mrs. Moses Taylor Pyne, eventually took her to Princeton in 1912 and the next year introduced her to University work which was to become a large part of her professional effort.

Quite early in her career the American Society of Landscape Architects was founded and although she repeatedly said in later years that she did not deserve the honour, she was made one of the charter members of the association. As the years passed and her roll of clients grew, she darted from Washington to Princeton, Yale, Bar Harbor, and Chicago wherever her work lay. 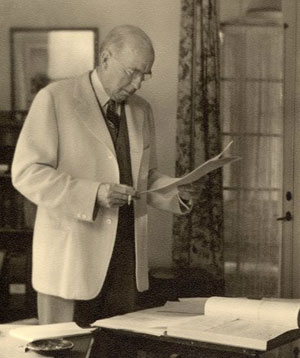 Another fortunate meeting led to a happy marriage with Max Farrand, who was at that time head of the history department at Yale. They were neither of them young and each had attained some distinction in their work, consequently they agreed to go ahead with their professional careers and the years of marriage enriched both their lives. When her husband was appointed Director of the Henry E. Huntington Library and Art Gallery, Mrs. Farrand migrated to California, with many excursions to her eastern work and even to Devonshire. The summer holidays were spent at Reef Point, where the two Farrands worked over the garden, planned for the future, and eventually founded Reef Point Gardens, an independent self-perpetuating educational and philanthropic corporation. 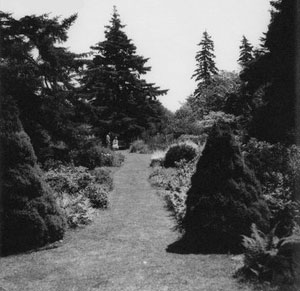 After Max Farrand’s death in 1945, his widow dedicated her life toward carrying out the plans they had often discussed, and in his memory established the Max Farrand Memorial Fund to help in carrying out the work at Reef Point Gardens. With the unflagging and unfailing interest and help of those who surrounded her, the house was completely remodeled, structural changes made, and the furnishing changed in some respects. The reference and old book libraries were installed and catalogued and the grounds altered for their hoped-for use. In her old age Beatrix Farrand saw more and more clearly that changes which affected the whole world had bearing on the enterprise she and her husband had started. Careful study and consultation brought her to the difficult decision to transfer the Reef Point project to another setting. The library was manifestly the keystone of the plan and its use problematical in a place distant from other educational surroundings of like caliber. Therefore she felt her duty led her to make the material a part of a teaching institution where it would be used and cared for in a manner fitting its educational value. The library and related collections were given to the University of California at Berkeley for the Department of Landscape Architecture, where they were welcomed and at once made a valued addition to the curriculum.

As the permanent value of the Reef Point Gardens scheme lay in the library, the actual plantations became of less importance without the background of books and other assembled material. Consequently the gardens were discontinued and Reef Point as a plantation for teaching came to an end, and Mrs. Farrand disposed of the acreage and her old home.

During her lifetime Mrs. Farrand received various honours, which she greatly prized. The honorary degree of Master of Arts and rank of professor was given her when she was appointed consulting landscape gardener to Yale University. Smith College gave her an Honorary Doctorate of Letters, the American Institute of Architects made her an honorary member, and the Garden Club of America gave their Medal of Achievement. Later still, the New York Botanical Garden gave their Distinguished Service Award and the Massachusetts Horticultural Society their Large Gold Medal.

She felt her life had been a happy one, she was grateful for what it had given her. She was ever thankful for the affection and help of her friends and associates during her long life, and attributed much to having had the privilege of their guidance.

Beatrix Farrand’s autobiography was written in 1956 and published in the Reef Point Gardens Bulletin in 1959.